The Russian game developer ‘Cats who play’ started their campaign to finance their project Syrian Warfare on Steam Greenlight and Indiegogo. 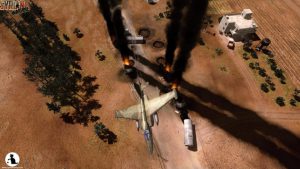 The developers state on their website that Syrian Warfare is a real time Strategy game with a high degree of realism and it should be based on a true story. Also the game offers a detailed simulation of modern weapon systems and tactical actions of different types of troops.

The importance of the game and the principles behind it are shown in a statement on their website.

“It’s is not a cheap actioner, but rather a game claiming to look and feel like a non-fiction doc. Following the game progress will bring you to better and clearer understanding of the hornet’s nest that has been stirred up in the Middle East. Understanding of how it all started and how all sides of the conflict tend to act now. We do understand the seriousness of the subject and we are not afraid to take on it.”