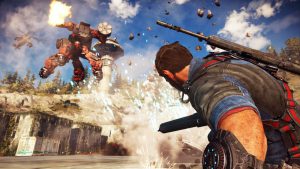 The second part of Just Cause 3’s Air, Land and Sea season pass, Mech Land Assault will bring gravity manipulating mechs into the game. The also added the new island of Lacrima which consists of an abandoned research facility and a prison camp that is guarded by deadly mechs. But you get also the possibility to take control over two mech types which are equipped with gravity guns.