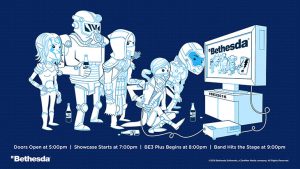 After Bethesda had its first E3 conference last year, where they announce d Fallout 4, they were back this year in LA at E3 2016 for their next big press conference. They for example announced VR support of different Bethesda games like Doom and Fallout 4.

Bethesda began their conference with the new game Quake Champions, a competitive multiplayer arena shooter for PC. They showed a cinematic trailer and Tim Willits from id Software, who presented the game, made clear that the game will be extremely fast and so it supports framerates until 120Hz. The game itself will get new and unique Warriors with different skills.

They will show more of the game at QuakeCon in August.

The game, which was already announced last year at E3, was shown again this year with a new cinematic trailer. Bethesda revealed now that the game will also come to IOS and Android and can be played online or even offline against an AI.

After Bethesda launched Fallout 4 in 2015, they now showed new Add-Ons that will come soon in a trailer. The first Add-On will be called ‘Contrapions’ and consist of more mechanical building props for your towns.It will launche next week. The second one will be called ‘Vault-Tec’, it will come out in July 2016 and it brings you the option of building your own Vault in the world of Fallout 4. The third and until now last announced Add-On will bring a Vacation Center and Theme Park to the game. It will be released August 2016.

Bethesda also announced a big update for their mobile game Fallout Shelter in July 2016 which will the also be released on PC.

Many people hoped for a TES 6, but instead they got a new special edition for Skyrim. This edition will come out October 28 2016 and it will bring Mod support to consoles and a graphic upgrade to all platforms.

Arkane Studios showed their new game Prey. The game will be a reimagination of the Prey series as it will be a sci-fi action game with a psychological twist. You are a test subject on a Space Station, which will be overthrown by Aliens which you have to fight against.

They will show more at this years QuackeCon.

For Doom, Bethesda announced an update for the game editor SnapMap and new gamemodes. As a first DLC, they announced that they will bring new playable Daemons and new maps into the game.

Everybody who already owns Doom, will get the possibility to test the DLC for a week.

At the press conference, Bethesda showed a look-back trailer on TES: Online. They announced the launch in Japan, the new Dark Brotherhood DLC and the DLC One Tamriel.

As the last game at the conference, they showed more informations about Dishonored 2, a game that was revealed last year and is a stealth action game with a steampunk setting in a fantasy world.