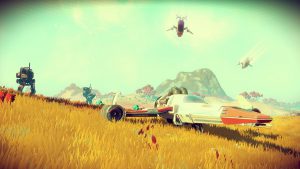 Sean Murray, the founder of Hello Games and the creator of the videogame No Man’s Sky announced on twitter that the publicly unknown legal battle with the media company Sky about the use of the word ‘Sky’ in No Man’s Sky is finally over after three years. Hello Games can now officially call their game No Man’s Sky and so they are not forced to search for a new name.

If this was one of the reasons that the game was delayed is not known.

Yay! We finally settled with Sky (they own the word "Sky"). We can call our game No Man's Sky. 3 years of secret stupid legal nonsense over

Because of this name right by ‘Sky’, even Microsoft had to change the name of their file hosting service ‘SkyDrive’ to ‘OneDrive’.