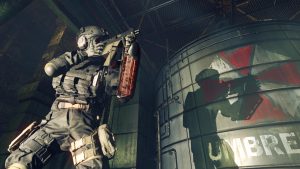 Capcom announced yesterday that they released the multiplayer-shooter spin-off to their game series Resident Evil, called Umbrella Corps. In the third-person game, two teams fight against each other in arenas which are already known from other Resident Evil games.

The game is digitally available for the PC and PS4 and it cost $29.99.