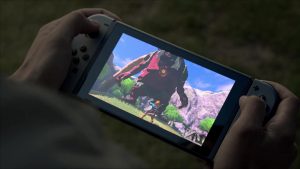 Nintendo announced their new console Nintendo Switch, formerly known as NX, a week ago. Now the game magazine Eurogamer claims that an insider confirmed to them that the console will have a 6.2” screen which will be able to to show the games in 720p and the screen should come with a 10-point multi-touch feature. This would be Nintendo’s first console ever that would support multi-touch. Nintendo themselves did not comment on the statement, as they will only official talk again about the Nintendo Switch in January 2017.