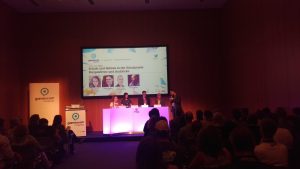 Gamescom Congress is a part of the wide range of events that happens around Gamescom. It focuses on problems outside video games, but always linkes back to them. This year there were two big areas which were focused on at the Congress.

On the one side there were many talks on the political involvement in the video game development in Germany, which includes regulation, funding and general recognition.

On the other side there were different talks about gaming as a form of education in schools and outside of school. Further more there were discussions on how to correctly teach children the limitations and dangers of games, social media and the internet and also how to prepare parents and teachers for the right handling of such topics.