After some time in time-exclusivity with Sony the game will now also come to PC later this year. 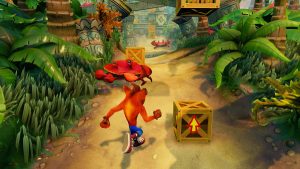 After the trilogy of the three classical Crash Bandicoot games where released on PS4 last year it will now be also release on other modern platforms such as the PC, the Xbox One and the Nintendo Switch. The release date will be June 10th.
For Activision, the publisher of the relaunche of the old Crash games was such a financial hit that they might even plan to do more with the Crash Bandicoot brand in the future.