Now only the Playsation 4 Player will be the only onew without cross-platform play. 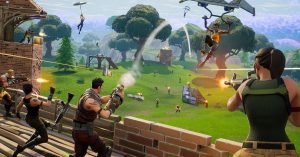 After the Fortnite developer Team announced before the weekend that Fortnite will be also be playable on iOS and Android devices. They now also announced that there will be cross-platform playing possible between Xbox One, PC, Mac, iOS and Android. They have been working together with Microsoft for some time now to make this possible.
Only players on the Playstation 4 have to renounce on cross-platform playing as Sony seems still to not wanting to allow it on their platform.