The publisher Take Two released their financial report for Q4 and FY16. The results from that are ‘stronger than expected’. 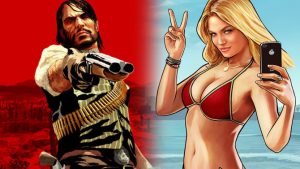 Game from Take Two and Rockstar

From the financial reports released by Take Two it gets more clear that the rumours about a new game or even games made by the developer Rockstar could be true.

Update:
CEO Strauss Zelnick made clear that there will be no new games released this year.

‘Rockstar Games is of course hard at work on some exciting future projects that will be revealed soon‘.