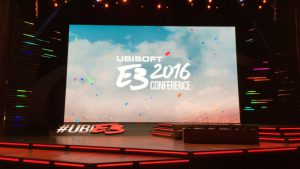 Ubisoft now exists for 30 years and so they put on a huge show at this years E3 in LA. Aisha Tyler lead us trough the world of Ubisoft games again as a moderator of the stage show. At the show we could witness new games, more gameplay and even different VR Games from the French games publisher.

Ubisoft began their conference with a surprising dance act to the music of Queen, to show of their new game Just Dance 17 which will be released in October 2016 for all platforms, so also for PC and the Nintendo NX.

After the game was revealed at last years E3, they now showed multiplayer co-op gameplay of the open world game in which you play as a group of special forces in Bolivia, to stop the drug cartel who took control of the country. When you play with four people together, you have the options to do the missions how you want them and so you can do also whatever you want. The game will be released for PC, Xbox One and Ps4 March 7 2017.

South Park: The Fractured but Whole

After the huge success of the first South Park game, Ubisoft showed last year the trailer for the sequel. Now they announced more informations to the game in which we will play again the new kid in town together with the well known characters from the TV series. In the game we play superheroes now and so each character has its own skills and special abilities.
In the shown gameplay we could see an overworked fighting mechanic , new gameplay features and bits of the story.
The game will be released December 6 2016.

At the press conference, Ubisoft showed the new DLCs Underground, which comes out June 28, and Survival, where they only showed a trailer. They also announced three new exclusive outfits, to celebrate 30 years of Ubisoft.

As VR gets more important this year, Ubisoft showed their new VR game Eagleflight. A PvP capture the flag game in VR. You flight as an eagle over the city of Paris and have to collect prey. The other team has to stop you. The game comes to all major VR platforms.

Ubisoft also announced another VR game. In the game you play with your friends together as the Crew of a Star Trek space ship. The game will be released this Falland also comes to all major VR platforms.

After the epic reveal at last years E3 of this fighting game and its multiplayer, Ubisoft now showed the story mode of For Honor with a cinematic trailer, and singleplayer gameplay. In this reveal, it is explained why the different groups of fighters have to fight against each other and even shows one of the boss fights in the game. The game will come to PC, PS4 and Xbox One February 2 2017.

With the small game Grow Up, the developer released a sequel to his last game Grow Home, in which you played a small red robot who has to grow a plant to get from point A to B. The game will be released in August for PC, Ps4 and Xbox One.

Ubisoft already announced Watch Dogs 2 a week before this years E3, and so we have already a big post about the game which you can find here. At the conference they showed a new trailer and a full ingame mission. In the mission the main character had to invade a house to save secret files, by downloading them before the getting deleted.
Ubisoft also announced that Ps4 owners will get all DLCs one month earlier.
The game will ship November 15 2016 to PC, Ps4 and Xbox One.

At the end of the conference, Ubisoft CEO Yves Guillemont revealed Ubisofts new game which will be called Steep. It is a open world winter sports action game which is set in the European Alps and in which you can do different activities, like Skiing, Snowboarding and Paragliding. The showed a trailer of the game and then even multiplayer gamplay.