The Techland developer team works on two new games. One of them is and open-world fantasy game with role-play elements. About the other game are no informations available yet. 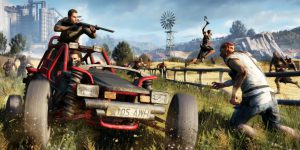 The CEO of Techland Pawel Marchewka stated at the ‘Digital Dragon’ Event that the team that developed Dying Light are working now on two new projects. One of them is an open-world fantasy game which also can be played in a co-op multiplayer mode.

The second game is still a secret, but it is possible that it is the official successor of Dying Light.
Both game should come out in the next three years.