No Man’s Sky – according to Sources it will be delayed

No Man’s Sky – according to Sources it will be delayed

The hyped game No Man’s Sky, developed by the small game studio Hello Games which should have come out in June 2016 is now probably delayed.

Two sources told the games magazine Kotaku that the game was bumped at least until July or even August. A GameStop employee said that they already revived marketing material with a release date on, but where also informed that tis date is now longer correct. 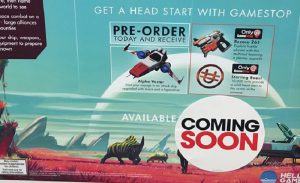